T.J was born at University College Hospital and raised in Muswell Hill, North London. As a grade-schooler, T.J. attended boarding school during junior and high school. At the age of 19 Ramini moved to Australia. 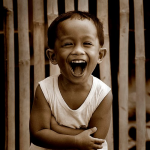